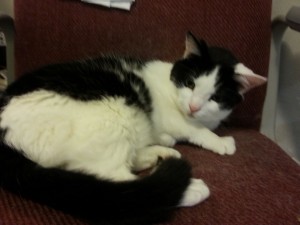 She wasn’t the worst cat I ever had, but the worst one was the one I hand-raised, and apparently human hand-raised cats are psychopaths.

Razzy peed everywhere. She sprayed me once. Maybe twice. On purpose, looking at us, she’d squat and pee on the carpet if she knew we couldn’t catch her.

Anyway, I knew something was wrong with her.

She’s always been hissy and even more so with the children and she hadn’t really been that clingy or talkative, but the last year or so, she wouldn’t shut up and she stopped hissing so much and she let the girlchild pet her. She would even sleep with the boychild once in a while, for a couple of hours. If I sat down or laid down, I could set a clock by how long it’d take her to curl up on me. She’d never done that much. She started purring a lot more when I petted her and her fur was soft and gorgeous-feeling. (Blackberry’s coat is pretty coarse.) (Blackberry is Raspberry’s littermate.) She would sit outside my bedroom door when it was closed (I sleep late) crying until Dude let her in.

Tuesday night she wanted under the covers and squished herself close to my legs. She has never done that before, but she had started sleeping on top of the covers squished close to my legs. Blackberry was squished against my upper back so I couldn’t move. I laid there for 2 hours not being able to do much more than doze. So I finally got up and went to the recliner. Razzy immediately followed me and slept on me.

Yesterday she was sleeping in the closet. This is not unusual. I found her there and petted her. She purred immediately. That was unusual.

So it’s been in the last year I’ve started thinking about how old they are, but comforting myself with how long my friends’ cats live, 15, 18 years. She was 12 then.

But I knew. This last 3-4 months I knew something was wrong. I didn’t take her to the vet because she didn’t seem to be in pain. She was mad at the cat who visited our back porch and would run it off. I think she had a boyfriend. She’d been eating grass, but they both do that on and off, and cats do that to settle an upset tummy. If she slept more than usual, I didn’t notice because she’s a cat. They don’t do anything but sleep.

She was just extra clingy, following me everywhere, wanting to be held constantly, like a baby who won’t fall asleep unless you’re holding him and wakes up the second you put him down. She was always more attached to me than anyone else. Other than that, she was being perfectly normal. I didn’t take her to the vet because, if that was what it was, it was her time.

She wanted out last night. That’s not unusual. They like to drink from the tub of rainwater outside. She would usually be at the back door crying to come in when I got upstairs to go to bed. She wasn’t there. The cat door was partially blocked off. I don’t know if she tried to get in or not, but she didn’t sleep with me.

So the boychild went out this morning and found her lying in the very nice grass by the neighbor’s mailbox, underneath the climbing flowers. She didn’t run, so he knew something was wrong, and she’d never gone that close to the street. When Dude brought her in, she wasn’t very stiff and she was still warm.

We buried her in one of the terraces in our back yard.

I’m going to fashion some kind of marker and put #MamasCat on it.