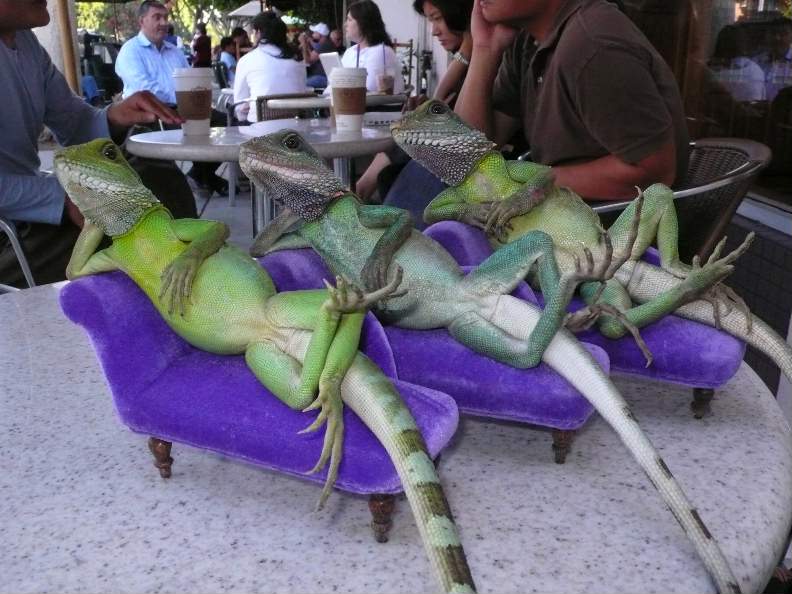 Yesterday I had surgery for the first time ever (not counting wisdom teeth). It was elective and went well, so everything’s fine.

Anyway. I very rarely go out. I’m a serious hermit. When I do go out, I avoid people like the plague. I don’t care to be touched or talked at by total strangers. I’m very conscious and protective of my personal space. But.

Maybe out of the corner of my eye. Maybe I use my ears to see (comes from years and years of transcribing for a living—you get to know people pretty well by voice inflection). Maybe a small gesture catches my eye. It doesn’t happen all the time, but it does happen enough that I get lots of ideas for characterization. I take lots of notes in my head. I’ve even taken notes on paper.

They never know I’m watching them.

Years ago, I was eating lunch at a restaurant, reading a book (natch), and three programmers for a medical software company headquartered here were talking in not particularly low tones. They were talking about a software they were selling that controlled the machines that administer insulin doses to inpatients. They’d found a bug that multiplied the dosages many times what was prescribed and it’d killed a few people before they caught it.

I managed to keep my jaw from dropping on the floor and went for pen and paper with great stealth. (Yes, I still have that conversation written down.) I went home after work and started writing as fast as I could. Before I got the story finished, though, it popped up on Law & Order, so I didn’t bother.

They never knew I was listening.

My preop nurse caught my eye. I don’t know why. She was average height, with curly red-blonde hair, average facial features, and an overweight apple-shaped torso—in short, very similar to how I envision Giselle from The Proviso to look. She wasn’t particularly bubbly; she didn’t smile; she was even a bit terse. She was relaxed but confident. She wasn’t ugly nor truly fat. Just…plain. Ordinary. Average. Whatever it was, which I don’t know, it made her very attractive. In fact, I told Dude she was very pretty.

Next up: My surgeon. He delivered TD #1. Until I went to him last month to say, “I want this procedure,” I never really knew how genuinely caring he is. I’ve very rarely had that from the doctors in my life, but this guy… I’ve never written a doctor as a character before, mostly because my relationships with them as (by turns) patient, investigator, and vendor have never really been good ones. But now I have a model from which to write one.

Last: My operative nurse is someone I’ve known for years, from church. At church, she has always been very dour and standoffish. Her husband is affable enough, and he’s our new bishop (THANK HEAVENS!!!). But I’ve never really gotten to know her because of the brick wall she wraps around herself. But yesterday… Yesterday she was all smiles and genuine warmth and caring. I’ve never seen that before, and now it makes me wonder what about being at church makes her spine stiffen and her smile to go away.

I see people watching people all the time. They sit and watch people go by… You can tell. It’s the people watchers like me—the ones who seem to not be paying attention to anything around them—who could turn you into a character one day.

And you will never know.