One day I saw somebody say, “Links roundups are lame.” Well, I like them, but I have minority opinions more often than not. You know what? Fuck that. I like ’em and this is my blog.

Is ‘devouring’ books a sign of superficiality in a reader? Amongst romance readers, of course, this question is fightin’ words.

Novels particularly were associated with such habits of consumption, for they became a symbol of the newly accessible literary market. Commentators described them as feeding unwholesome appetites. In turn, certain readers were linked to novel-imbibing habits, particularly women. Describing their reading as consumption was a way of denigrating them, for it positioned them as vulnerable, ignorant and morally contagious. Gustatory metaphors often implied that women read according to the flesh, in contrast to the disembodied realm of ‘rational’ masculinity.

Countered by slow reading. These (to a fiction reader) are also fightin’ words:

But Lancelot R Fletcher, the first present-day author to popularise the term “slow reading”, argues that slow reading is not so much about unleashing the reader’s creativity, as uncovering the author’s. “My intention was to counter postmodernism, to encourage the discovery of authorial content,” the American expat explains from his holiday in the Caucasus mountains in eastern Europe. “I told my students to believe that the text was written by God – if you can’t understand something written in the text, it’s your fault, not the author’s.”

Emphasis mine. I have several opinions on this, all conflicting, except that postmodernism does tend to drive me up a wucking fall because invariably the term “intersectionality” and others like it enter the conversation. They’re rabbit trails that may or may not be as interesting as the original text.

One literature professor, Pierre Bayard, notoriously wrote a book about how readers can form valid opinions about texts they have only skimmed – or even not read at all. “It’s possible to have a passionate conversation about a book that one has not read, including, perhaps especially, with someone else who has not read it,” he says in How to Talk About Books that You Haven’t Read (2007), before suggesting that such bluffing is even “at the heart of a creative process”. 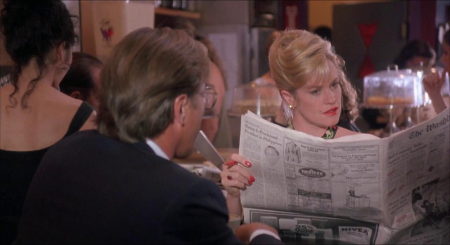 See: Born Yesterday. No, seriously, I’m telling you to see the movie. It’s not Great Art (nominated for a Raspberry)1, but there’s a pivotal scene with Nora Dunn’s character that is the thematic heart of the whole movie, when she’s surprised that Melanie Griffith’s character read the entirety of Democracy in America. She tells her that nobody ever reads those books. They just know enough about it to look smart at parties.

1) There are way too many books to be read to spend one’s life slow reading each book you pick up.

2) How many times have you devoured a book, then gone back for the express purpose of picking up details you know you missed the first time because you were so engaged with the story?2

3 thoughts on “On reading – links roundup”