The perfect bookstore has a name: Decadence.

This is not another one of my bookstore-of-the-future/how-to-save-brick-and-mortar-stores posts. This is about a bookstore I dreamed up while writing The Proviso four years ago, the one that spawned the previous bookstore posts. Specifically, it’s Giselle’s bookstore, which was torched, causing her to have to reboot her life at the grand ol’ age of 30 by going to law school. (Because that’s what everybody does when they have to reboot their lives, right? Right?)

This bookstore was in the River Market area of Kansas City, Missouri, and most closely resembles this building: 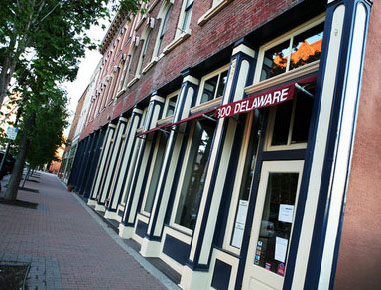 Giselle describes it this way:

I owned a bookstore for seven years […] I shared space with a patisserie on one side of me and a confectionery on the other. Maisy and Coco weren’t my business partners, exactly; we just figured if we knocked down our walls and unified our décor, we’d all make more money and it worked. […] Decadence wasn’t a bookstore with food. It was a destination. I stocked romance novels of all kinds. Couple that with Maisy’s gourmet chocolates and wine, and Coco’s pastries, the events we put on every weekend… I was doing very well; we all were. I was never going to be independently wealthy, but I made a lot of money doing something I loved.

I’ve been percolating this post for a long time, and after many, many Twitter discussions on the relationship between independent brick-and-mortar booksellers and the romance genre (not good) versus Borders’ and Barnes & Nobles’ willingness to step in where the independent booksellers won’t (but Borders, the more romance-friendly store, went bye-bye), I decided to do yet another perfect bookstore post.

Behold, my real idea of the perfect bookstore:

And I still think this combination of products and location would make some serious bank. (Add an Espresso machine in the basement…) (A used books section on the second floor…) (Events at lunch and on the weekends…)

I was re-inserting pictures that got lost in the move so a friend could link to them, so I figured I’d add a couple of notes.

1. Since YA has become a bigger part of the market now, that section would get expanded.

2. I’m reediting The Proviso, and Giselle adds this to her description:

“Wine, chocolate, sex. […] We had PMS survival kits. Better than Midol. Men came in specifically for those.”

Trust me, I’d send my husband across the metro to Decadence to get me a PMS survival kit.

I wrote on this topic two months ago.

I still don’t know what to do, but I’m losing my patience because I discovered that writers of some of the stuff that’s really bad are giving writing advice. Oy. Stop it. You’re not qualified to give writing advice. Really*.

in light of a recent romancelandia kerfuffle about writers/unpublished authors reviewing,

in light of Mormons’ cultural tendency to say nice or nothing at all,

in light of the fact that I’m a reader first and I’ve spent money on these books and I have a reader’s perspective and want to express it,

in light of the fact that writers reviewing is generally fraught with dangers, not the least of which is shitting in your own nest,

On the other hand, there’s a very small minority of Mormons who’d brave my stuff anyway, so the worst criticism I’m bound to get—probably anonymously—is that I’m too graphic and my characters swear and they DNF’d it after the first two pages. Okay. And?

I’ve got several Mormon novels on my TBR list (albeit heavily weighted for stuff that’s been pre-vetted by readers with whose taste I get along). One I’m reading, The Road Show by Braden Bell, is pretty good. It’s not a page-turner and it’s episodic (natch, written by a playwright/screenwriter), but that’s never bothered me unless badly done. It gets a little churchy-heavy-handed in spots, but I like it.

I read Angela Hallstrom’s book Bound on Earth and I loved it. I’m dying to write a review of that, but I have nothing to say other than “I loved it” and respond to some reviews I read on Goodreads. Oh, and that it’s a novel a short-story-writer-who’s-not-a-novelist would’ve written (which is both its weakness and its strength). I’m interested to see if she can write a long work that’s not a series of interconnecting/interdependent vignettes strung together.

As a compromise, I created a new alter-ego to review, but I don’t like doing that. I’m not cut out to sustain such an act.

The unnamed book I previously linked has been haunting me (not in a good way) for months, because this is what the market base for Mormon fiction, the one that wants clean and good (e.g., my mother), associate with Mormon fiction. They are the people who need to be brought back into the Mormon fiction fold, and they aren’t going to be unless Mormon fiction improves. It can’t improve unless someone just says, “This sucks. It should never have been published. Next!”

But it still sucks.

*But am I? No. It’s why I don’t give writing advice. At least not publicly. It’s hard to give writing advice to someone who feels free to harshly critique your stuff with great (if dubious) authority, but wants you to comment on theirs and the only thing you can say is, “It’s dead boring.” But instead you give advice on how to improve it, and they insist they’ve written a flawless masterpiece. And really, there’s nothing technically wrong with it except it’s dead boring. Boring sucks. First rule of writing: Don’t suck.

**Because I refuse to be held accountable for your salvation.

I don’t care how good your beta readers and critique partners are.

I don’t care if you’re a traditionally published midlist author going out on your own.

You want to self-publish? Put in the time and the effort and the money, just like a big publisher would. This is a business and you are creating a product to sell to people. Give them a good product.

That product begins with a professional editor.

“Everyone gets fired at least once in their life. And if not, well, they’re just not trying very hard. And we all think of brilliant and immature ‘shoulda saids’ and ‘shoulda dones’ for weeks after. (Okay, years.) In this collection of loosely related stories, Brett shows again and again that getting fired is really quite easy.”

This morning I butted into a Twitter conversation between @jackiebarbosa, @elyssapapa, and @growlycub about Romance heros/heroines who are struggling financially at the end of the book, but they shall live on love:

Which led back around to the title of the book which started the conversation I butted in on:

This entire conversation happened in the course of an hour in casual conversation on Twitter, and money was spent. (More money would’ve been spent if the publisher had the sense to allow people out of the US to buy it, but that’s a conversation for another day.) (Also, it was $5.99 on the Kindle, which is my cutoff point for ebook prices, so there was another advantage.) As far as I know, I’m the only one who bothered to tweet that she bought it, but that’s not to say nobody else bought it.

The “need” was created.

The “need” was satisfied.

Immediately. Easy and with no friction.

There are a lot of lessons to be learned from this. Insert your favorite lesson here.