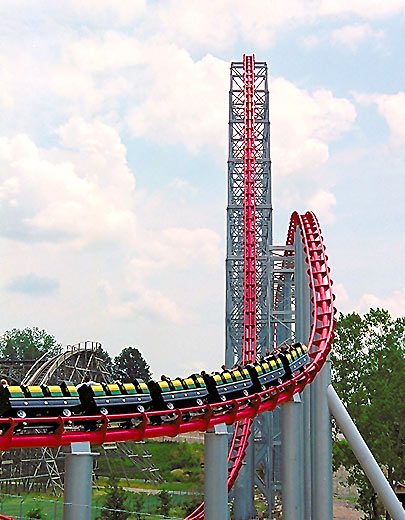 A friend wrote something on her Book of Faces, and instead of taking up all her comment space, I thought I’d put it here. I felt impressed to say a couple of words, but then it went into many words and then paragraphs. OMG I take a lot of words to say a thing.

At some point in my life’s ride, I stopped thinking, planning, wishing, and dreaming and got on the rollercoaster and went for the ride to see where it went and deal with the fallout later. I did a bizarre, outlandish thing. I wasn’t afraid because I wasn’t thinking. I was moving too fast to think anyway, too fast to second-guess myself. That thing I did got me exactly what I’d been looking for. But the rollercoaster ride was twisty and … fun. It was a grand adventure, really. That was 14 years ago.1

Then this summer, I got on a real rollercoaster for the first time in 25 years.2 I didn’t really want to. I don’t like rollercoasters. But Dude and XX Tax Deduction wanted to ride it so there I was with XY Tax Deduction who really didn’t want to ride it and after the first drop, it was wonderful. Well, I rode it a few other times and the last time I rode it, I didn’t have the lap bar down quite as tight, so I wasn’t completely pressed into my seat. And on the first hill and drop, I floated above the seat just an inch or whatever, but it was a fucking grand epiphany.3

Nobody ever told me that the secret to riding rollercoasters is to keep the lapbar just a tidge loose so you can let go and float over the hill and drop.

I have very rarely felt such an intense joy in my life as I did that moment I floated over the drop because my lapbar made it possible for me to let go and physics did the rest.

Okay, it’s really macaroni salad and about as ubiquitous as can be, but there’s a story behind the title.

The 1980 United States Heat Wave was a period of intense heat and drought that wreaked havoc on much of the Midwestern United States and Southern Plains throughout the summer of 1980. It is among the most devastating natural disasters in terms of deaths and destruction in U.S. history, claiming at least 1,700 lives[1] and because of the massive drought, agricultural damage reached US$20.0 billion (US$55.4 billion in 2007 dollars, adjusted for the GNP inflation index).[2] It is among the billion-dollar weather disasters listed by the National Oceanic and Atmospheric Administration. […] In Kansas City, Missouri, the high temperature was below 90 only twice and soared above the century mark (100 °F/38 °C) for 17 days straight[…] [Wikipedia]

And we did not have air conditioning. No, we did not. But my grandmother, who lived about four blocks away, had a little window unit, so every afternoon, we would hie ourselves up there to sit in her living room for a while, then come home to sleep. If you can call it that. (Oh, and a little trivia: My room faced east, so I had the joy of the first blast of heat every morning.)

My mother would make dinner that we would bring to grandma’s while we sat in the cool. And one day she made this:

As you see, it involves a stove and boiling water. We three children (12, 6, and 4) were lined up at the door waiting for mom to bring the ginormous stoneware crock full of this so that we could go to grandma’s. Unfortunately, two steps from the front door, she tripped, dropped the bowl (which broke), and sprayed macaroni salad and clay shards everywhere.

Hence the name. I don’t think my mother’s made this since and I have only a couple of times, but I love it and thus, the block party Saturday was graced with TWO dishes out of the Dude-and-Mojo household.

That’s what the fresh concrete in front of our beautiful porch says: Dude + Mojo = ?