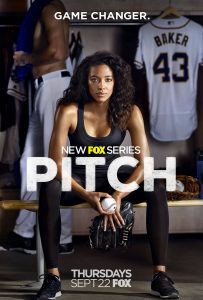 My 10-year-old XY TD can’t wait to see Pitch. He wants to watch it because it’s something that’s never been done before, a woman pitching in MLB.1 He doesn’t see a girl. He sees himself. In her. The underdog2,3 misunderstood, not wanted or liked, basically alone with too few allies, too different to have as smooth a ride through malehood as his peers.

that compels people to reflect and grants epiphanies like a fairy godmother?

Thirty years ago, I was at the KC Royals parade after they won the World Series. You know, George Brett. Bret Saberhagen. Those guys.

I didn’t care about baseball much before or after that, not that I was ever anything but a fan-in-name-only because I didn’t understand the game. A childhood watching Little League and trying to figure out radio announcers’ jargon tends to blunt one’s enthusiasm.

And then there was college and life and the strikes and the juicing and the Congressional hearings and who wants to get into baseball when they threw a big temper tantrum for a game that’s all fake anyway? You want more money for your steroid injections? Fuck you.

Somewhere in the last decade I was vaguely aware it had cleaned itself up. Or, at least, I knew everybody was playing and that the Royals were a losing team. All. The. Time.

Last night, I was talking to Dude, who taught me more about baseball during the ALCS last year than I have ever known or suspected could be. I wasn’t interested in learning anything about it until the Royals won the ALCS last year.

As the season has gone by and I saw them winning, I could start to see why they were winning. Little things. Doing what they did in 1985. The correlation of strategy is spooky. Being nice guys (the Royals recruit for nice guys, you know; not one bad boy amongst ’em). Good to their women, good to their kids, nice to their fans.

But not pushovers. The Royals started the season being the Bad Boys of Baseball. Why? Because everybody else came into the season with a hateboner for them, and they will clear a bench as fast as George Brett and pine tar.

So everybody settled down and played ball. They don’t depend on home runs. They take every possibly viable opportunity no matter the consequences. They shoot through the target, not at it. “Hacking” at the ball. Stealing bases. Having lots of good pitchers. Hitting the wall, even if it tears your ACL. Baby steps. Or, as I found out last night, “Playing the game 90 feet at a time.” They have fun.

As I watched, listened, and read, the Royals managed to give me something I’ve been needing my whole life.

So I was telling Dude, who is/was a Dodgers fan, by the way, about the parade I went to in 1985 and I started to tear up. I don’t know why.

But I was there 30 years ago and if they win this year, I’m going to be there and take my kids. And I’m going to tear up. And I won’t know why. And my kids will have that memory like I have mine. And maybe they’ll get to take their kids.